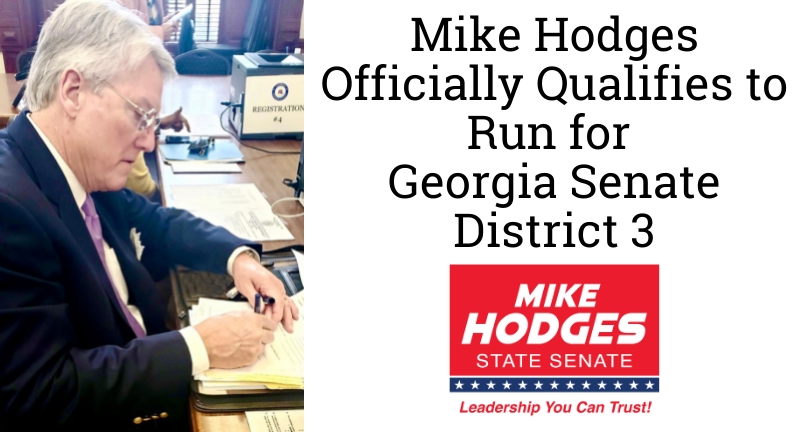 Glynn County native Mike Hodges has announced his candidacy for Georgia State Senate District 3. Hodges, a Republican from St. Simons Island, has been a banker during his entire 47-year career and currently serves as president of the Southeast Georgia Coastal Market for Ameris Bank which includes Glynn, Camden, Liberty and Ware Counties.

“It’s important that we have a strong, steady and trusted voice in Atlanta,” said Hodges. “I will protect our values, our freedom and our way of life. I will work tirelessly to earn the respect and support of my neighbors throughout the district. This begins with accountability, listening to others and honest, open leadership.”

Selected by peers and colleagues, Hodges has served in many leadership roles in civic and professional organizations. This is his first time seeking an elected public office.

“I am not a politician, but I have spent a lifetime building relationships and trying my best to make this area a better place to live, work and raise a family,” said Hodges. “As a volunteer on many local boards, my priorities have been expanding healthcare services, improving education and boosting economic development. I would like to use my experience to make a difference in the General Assembly. I will be ready and able to serve my constituents and senate district on day one.”

Hodges has been a member of the Glynn-Brunswick Memorial Hospital Authority since 2003 including serving as chair. He has also served on the board of Southeast Georgia Health Systems (SGHS) since 2015 and is current chair of the Coastal Community Health Board, the governing body over the affiliation between SGHS and Baptist Health System in Jacksonville.

During his tenure, there was a transformation of public healthcare services from a relatively small local hospital to a regional healthcare provider spanning four counties with a capital investment of over $200 million and the recruitment of more than 125 physicians.

A graduate of Brunswick Junior College (now the College of Coastal Georgia), Hodges is the former chair and board member of the College Foundation. Along with other community leaders, he helped spearhead the transformation of the two-year junior college to a four-year college serving students from across Georgia and other states.

Hodges was a board member of The Jekyll Island Authority from 2005-19 following an appointment by Gov. Sonny Perdue and a reappointment by Gov. Nathan Deal. He served as secretary-treasurer and was chair from 2017-19.  While he was a member of the Authority, Jekyll Island was redeveloped with more than $100 million in state funding and an additional $200 million in private investments.

A past president and active member of the Brunswick Kiwanis Club for the past 35 years, Hodges is the current finance committee chair of the Coastal Georgia Historical Society, and he is also a board member of the Communities of Coastal Georgia Foundation. He has served as chairs of United Way of Glynn County and the local chapter of the American Cancer Society.

A founding director and senior officer of First Bank of Brunswick in 1990, he was named CEO in 1996. The financial institution was acquired by Ameris Bancorp in 2001.

Married for 38 years, Mike and his wife Dana have two grown sons and are looking forward to the arrival of their first grandchild this summer.

Georgia Senate District 3 includes the counties of Brantley, Camden, Charlton, Glynn, McIntosh, and portions of Ware. The primary election is scheduled for May 24. Early voting begins May 2.